Access to portfolio stars may not be enough to counter concentration risk.

Before Covid-19 brought much of global deal making to a halt, single-asset secondaries were the fastest growing part of the expanding private equity secondary market. Driven by intense competition, the secondary market – formerly restricted to buying private equity fund stakes held by particular limited partners – has quickly diversified into general partner-led deals involving the collective transfer of assets from one investor group to another. Single-asset secondaries, the latest GP-led wrinkle, are the sale of a sole investment, usually a company. The best offer access to a portfolio gem, typically from an aging fund where incumbent investors want liquidity. Single-asset secondaries can generate great returns, while corporate managements thrive under exceptionally long periods of private ownership. But their Achilles’ heel is elevated concentration risk. Our panelists address the pros and cons of single-asset secondaries and how they might survive in the newly risk-sensitive world.

How is Covid-19 likely to affect the appeal of single-asset secondaries?

Matt Jones: The Covid-19 crisis won’t have an impact on the long-term appeal of single-asset secondaries, in my view. Over the short term everything is being hit, but high quality single-asset secondaries should hold up better than traditional sales of limited partner stakes, transfers of entire portfolios and strip sales. As people grapple with uncertain sales and profit forecasts and with what fair pricing is, many single-asset secondaries will be easier to evaluate and price than multi-asset portfolios. Over the next six to twelve months this means we could see a proportionate increase in transactions for single assets, particularly for those relatively unaffected by the crisis. In a private equity space likely to be starved of distributions in the near term, excellent companies with significant potential that wouldn’t otherwise come to market now may get partially sold through single-asset processes. This would give sellers liquidity while allowing them to keep appreciation potential.

Richard Howell: My take is a bit more negative. With the significant impact of Covid-19, we get the sense that investors are nervous about the high concentration levels and consequent higher risk associated with single-asset secondaries versus traditional LP stake portfolios. Secondaries have traditionally been about low concentration and highly diversified risk. It’s also worth remembering that the early general partner-led deals were mostly done with underperforming assets requiring both capital and time just for values to reach acceptable levels. Some of these more cyclical assets could suffer an impact from the current crisis. Coupled with concentration concerns, this could cause the GP-led market to pause for a while. That’s a shame – in the past few years single asset secondaries have become a valuable tool for optimizing returns and retaining upside in top-tier assets.

Michael Hacker: As Richard says, there were a number of deals done in the market where we had some level of concern. If they underperform it’s likely to impact the popularity of single-asset secondaries even after we come out of the Covid-19 crisis. Historically, one reason capital flowed to GP-led deals, and more recently into single-asset secondaries, was because of return compression in most other areas of private equity over the past half-decade. We saw this compression in the traditional LP interest market, especially for diversified portfolios of funds. It’s possible specific single-asset deals will happen as Matt describes, but I suspect that secondary buyers will be focusing their attention elsewhere. In particular, we’d expect to see more interesting opportunities in the LP interest market as assets are repriced through the course of 2020. 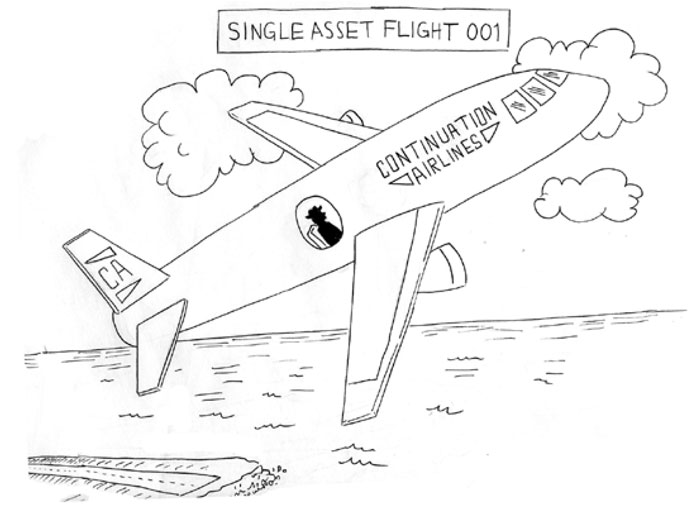 Do any of you foresee buyers and sellers employing innovations to get single-asset deals done during the crisis?

Matt Jones: I’m pretty sure we’ll see investors incorporate more downside protection into these deals through greater use of structures like preferred equity. This will especially apply when GPs want to hold on to potential appreciation, but no longer have uncommitted capital for urgent cash needs. Those needs could be driven by an underfunded balance sheet or even an unexpected acquisition opportunity associated with the current market dislocation. In many instances during turbulent times you may only be able to attract secondary buyers if they have some form of protection, such as preferential rights to cash flows.

Richard Howell: They can be the most attractive way to raise capital when you need to reconcile seemingly contradictory investor priorities for assets that have been held a long time. In our most recent deal, the 2019 transaction for ice cream group Froneri, we provided a great return to investors who wanted liquidity from a fund that had reached maturity. At the same time, we offered an attractive investment opportunity to investors willing to continue the value creation journey, while crucially generating from secondary investors additional capital to drive accelerated growth. These deals offer secondary investors both the potential of an appealing time-weighted return and a relatively high multiple on investment.

Michael Hacker: First of all, these transactions must be priced attractively for LPs – this will be a key issue moving into the post-Covid-19 environment. There also needs to be a clear rationale for pursuing a single-asset secondary beyond maximizing value for the GP. What commonly drives these transactions is a mismatch between the optimal exit timeline for a specific company and the life cycle of the fund in which it’s held. Many GPs in these transactions are feeling pressure to generate liquidity for LPs. Yet they may be reluctant to sell a winner prematurely. In nearly all the transactions we’ve pursued, the rationale is clearly attributable to an exogenous factor that acts as a catalyst. Those factors include strategic acquisitions, a need for new capital, and management teams or minority shareholders seeking liquidity.

Matt Jones: I agree that for deals to work for everyone – limited partners, the general partner and new buyers, there must be a clear rationale for why the company no longer fits the existing structure. Legitimate rationales boil down to two criteria, time and money – i.e. more time and/or cash is needed to increase company value. For example, if you’ve got a great company that’s pushing the envelope on the investment period and there are investors who want liquidity, in most cases you’d be keen to avoid putting it on the block in today’s environment – better to transfer it to a continuation vehicle via a single-asset transaction and wait for improved conditions. Alternatively, a business might need growth capital not available from the fund. Selling outright could significantly undervalue potential, while transferring it to a continuation vehicle and enabling a cash injection from new investors may lead to higher returns.

To vet single-asset secondaries what questions should LPs ask and can they evade deals that they don’t like?

Matt Jones: To make sure deals are not being done for the wrong reasons a lot of questions need asking. Among them: is the GP mainly trying to prolong management fees; will the deal crystalize carry over the short term without boosting return prospects; does it just give the GP another roll of the dice on a poor performer; will the company get needed cash to drive growth; what proportion of the GP’s own capital – either carry or committed capital – is being taken off the table or reinvested – this is a critical determinant of incentive. Beyond asking these questions, it’s crucial that limited partner advisory committees carefully examine proposed transactions. When they don’t like a deal, it usually doesn’t get done.

Michael Hacker: We also believe limited partner advisory committees play a critical role asking these questions. Arguably, buyers and advisors are the most important line of defense against GPs pursuing transactions that don’t adhere to the high standards established in this market. We were enthusiastic supporters – along with several other buyers and advisors – of the work done by the Institutional Limited Partners Association last year to create a framework for these transactions. It is definitely in our interest to ensure that the GP-led secondary market is perceived positively by LPs. We want to make it as difficult as possible for bad deals to happen. Having clear guidance from organizations like ILPA makes it easier on advisors and buyers alike to ensure the market’s long-term success.

Richard Howell: As a general partner I’d say you have to do three things to fully answer limited partner concerns about the appropriateness of a single-asset secondary, and whether it’s attractive or not. You have to communicate heavily and transparently; secondly, it’s critical to bring a third party advisor on board to clearly demonstrate that fair value has been established – through a process as rigorous as in a straight out sale; and finally, you’ve got to offer a clear strategic rationale for the deal. As Matt noted it can’t just be about taking money off the table or improving carry terms. These transactions have to create a means of enhancing a company’s fundamental value.

What are other parties to single-asset secondaries, namely new buyers and portfolio company managements, hoping to achieve through these transactions?

Michael Hacker: As a secondary buyer moves from diversified portfolios of private fund interests with hundreds of underlying assets, to GP-led transactions involving multiple portfolio companies and on to single-asset secondaries, the motivation is the promise of progressively higher returns. Each stage brings higher concentration, so we need to be increasingly selective around the assets we buy. In a single-asset transaction, the bar is incredibly high. We focus on highly defensive companies with predictable earnings and recurring revenues, that can be sold even in challenging markets. We also need close alignment not only with GPs, but also with management. Management needs to be enthusiastic about continuing their partnership with the GP. We want them to have the right ownership and incentives in place.

Matt Jones: I agree with Michael on the characteristics you should aim for in these deals. They also allow buyers to invest in the stars of general partners’ portfolios; Froneri, mentioned by Richard, is a case in point. Zeroing in on the stars of a portfolio is not something afforded to investors in any other type of secondary. Another critical issue is general partner alignment. When the GP has an even greater stake in the restructured asset than was previously the case, these deals usually go well. If the GP takes the majority of their capital off the table, that’s a deal breaker for us. For portfolio company managements, single-asset secondaries clearly offer minimal disruption compared to a full sales process. They also avoid any uncertainty or perceived risk regarding how new owners might run the company or interact with management, given that the existing GP remains in control.

Richard Howell: I can attest to the fact that the focus on alignment is intense in single-asset secondaries. In the Froneri deal we spent a significant amount of time explaining the importance of our overall exposure, what the economic interests were of specific PAI team members and how closely each of them was involved in the company’s development. The importance of our team’s ongoing investment in Froneri was key for all the investors in the deal. The alignment of management is also a critical component. We asked management to do a lot – the due diligence, Q&A sessions and presentations tied to this deal took up as much of their time as a straight-out sale would have. I’m happy to report they were enthusiastic when it came to reinvesting their capital within a familiar partnership.

triago quarterly / June 2020
TABLES AND TEAM NOTE
The GFC and Today
Market analysis
Private Equity is Raring to Go
THE TRIAGO ROUNDTABLE
The Impact of High Prices on Private Equity
private equity blog
A round-up of current trends and issues for general partners and limited partners
download the pdf document
The Triago Quarterly - June 2020
© COPYRIGHT TRIAGO. ALL RIGHTS RESERVED
Business continuityLegal noticeCredits
fringilla dictum dolor. porta. libero. sit id libero
We use cookies to ensure that we give you the best experience on our website. If you continue to use this site, we will assume that you are satisfied with it. Ok